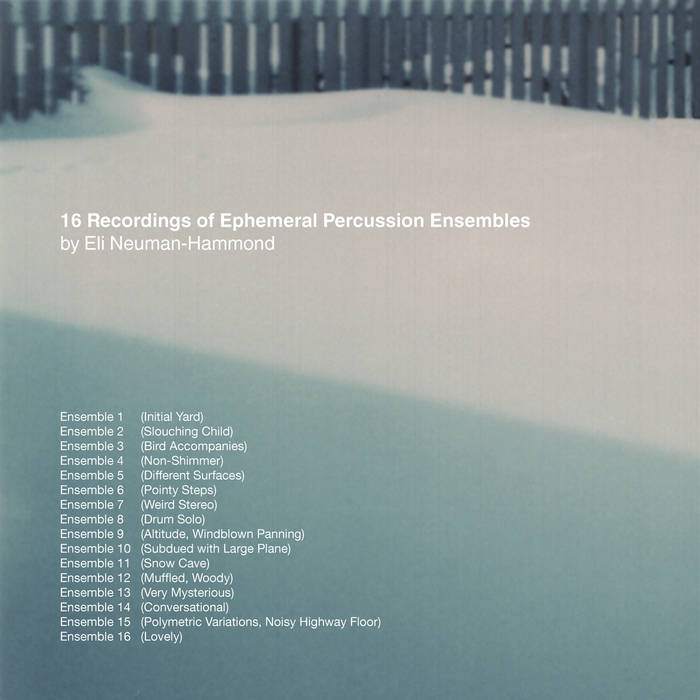 Plows and shovels move snow all winter, making inadvertent monuments to the cold that outlast the season and store energy for a thermal exchange when the right conditions are met. When it finally warms, quiet assemblages spring into motion for a few fleeting days, as snowmelt trickles down eaves, gutters, pallets, sidewalks. I made most of these recordings on such a day in Providence, Rhode Island, when most of our winter snow melted.

Unlike an urban rainstorm, whose din emerges ubiquitously, these trickles occur in isolated pockets. The rain cloud hovers impartially above the city, but ice has coordinates. It is intimate with the forms and surfaces of the city; it articulates the city as it melts. These apparently natural water sounds are thus intensely cultured; they emerge unexpectedly along the contours of the urban environment, which localize the water into many small "ensembles.”

With this musically-inflected metaphor I hope to underscore how these recordings oscillate between musical and documentary aesthetics, a tension uniquely brought forth by recording technologies. As with the microscope, a microphone brings matter nearer to us at the same time as it abstracts it into artificial relations with our senses. It describes and it argues. Vibrations are headily amplified when they pass between kinetic and electric media. And yet waveforms are contoured by events in the world, in fact become contours of events, even as they fly away from them-- towards music, for instance.

Since 2001 and/OAR has been a publisher and internet mail order shop specializing in environmental sound and various forms of avant-garde sound art.

Be sure to also check out "and/camp" pages for either/OAR and mOAR.

Bandcamp Daily  your guide to the world of Bandcamp